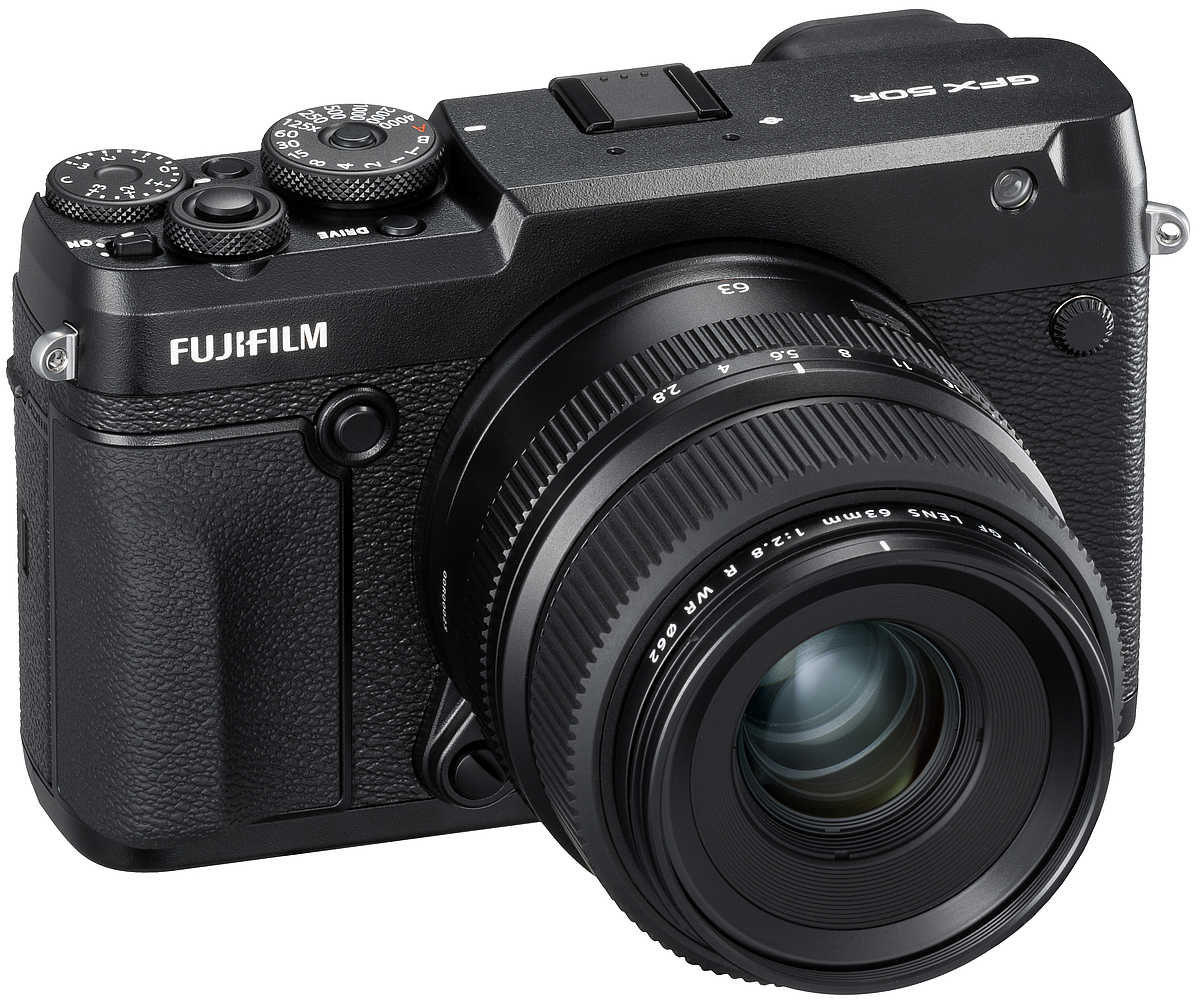 A large 51.4MP image sensor in a compact and lightweight body is reminiscent of renowned medium format film cameras widely used in street and documentary photography

The GFX 50R continues the compact, lightweight and superior image quality characteristics of Fujifilm’s GFX medium format mirrorless digital camera system, while weighing approx. 145g less and 25mm thinner than the FUJIFILM GFX 50S (GFX 50S). The GFX 50S has attracted high praise from professional photographers since its launch in January 2017. Yet, many field photographers who specialize in weddings, portraits and street photography have sought after an even more compact and lightweight camera, along the line of Fujifilm’s traditional medium format film cameras such as GA645 (*discontinued) and GF670 (*discontinued). With this in mind, FUJIFILM is adding the new “GFX 50R” to the lineup.

1. Compact and lightweight (approx. 775g *2) medium format mirrorless digital camera in the rangefinder style
･The GFX 50R is approx. 145g lighter than the GFX 50S (weighing 920g with EVF). The camera body is just 66.4mm thick, 25.0mm thinner than the GFX 50S.
･The rangefinder style design allows you to keep your eye on a subject while looking through the viewfinder with the other eye. This enables checking and feeling the atmosphere of the scene around your subject matter, shown in the EVF.
･The GFX 50R is equipped with the 0.77x 3.69M-dot organic EL electronic viewfinder (EVF). This allows accurate focusing despite the large size of the medium format sensor, which has a shallower depth of field than that of a 35mm full frame sensor when shooting at the same angle of view.

2. Equipped with 51.4MP medium format CMOS sensor and X-Processor Pro image processing engine
･The medium format (43.8mm x 32.9mm) “G Format” sensor has better per pixel light reception capability than that of a 35mm full frame sensor of the same resolution. Furthermore, the micro lenses have been designed to optimize the light gathering performance and image resolution as well as the handling of data from photodiodes are customized to achieve a superior level of image quality, surpassing that of existing cameras that use a sensor of the same size. As a result, the GFX 50R delivers images that precisely reproduce the subject’s texture, three-dimensional feel and even the atmosphere of each scene.
･The GFX 50R features the X-Processor Pro image processing engine. Supporting FUJIFILM’s renowned Film Simulation modes, the camera allows you to opt for the tonality of photographic films such as Velvia, PROVIA and ACROS, used for many years in medium format film cameras by professional and enthusiast photographers alike.

3. Intuitive handling and rugged camera body that caters for the needs of all photographers
･The GFX 50R is equipped with the Focus Lever to allow quick adjustment of the focus point. The elimination of the selector buttons provides extra space to hold the camera better. The top panel sports two dials, one for shutter speed and the other for exposure compensation. The milled aluminum dials give the camera a premium feel and satisfying clicking touch.
･The robust magnesium alloy body is weather-sealed in 64 places to provide dust and weather resistance and ability to operate at temperatures as low as -10℃. Its durability caters to the needs of all photographers.

4. Extensive lineup of the medium format mirrorless system, “GFX system”
･The medium format mirrorless system, GFX system, currently offers a lineup of seven FUJINON GF lenses, covering focal lengths from 23mm (equivalent to 18mm in the 35mm film format) to 250mm (equivalent to 198mm in the 35mm film format). All GF lenses are able to resolve up 100MP which means they are future proof. They are also dust and weather resistant and designed to operate at temperatures as low as -10℃ so that they withstand professional use in harsh conditions.
･Tethered shooting is essential part in a professional photographers workflow. The GFX system supports tethering software “HS-V5 for Windows” and “Tether Shooting Plug-in PRO for Adobe® Photoshop®”, “Capture One Pro (FUJIFILM)” is also due to be released, giving extra options in studio sessions for commercial and fashion photography. This means that a professional photographer can incorporate the GFX system into their regular workflow.

5. GFX system’s first Bluetooth® compatibility for enhanced connectivity
･This is the first model in the GFX system to support the Bluetooth® low energy technology. Captured images can be transferred easily and quickly to smartphones and tablet devices paired with the camera via the FUJIFILM Camera Remote app.

*1 Image sensors measuring 36mm×24mm, used by many DSLRs
*2 Operating weight (including the weight of battery and recording media) 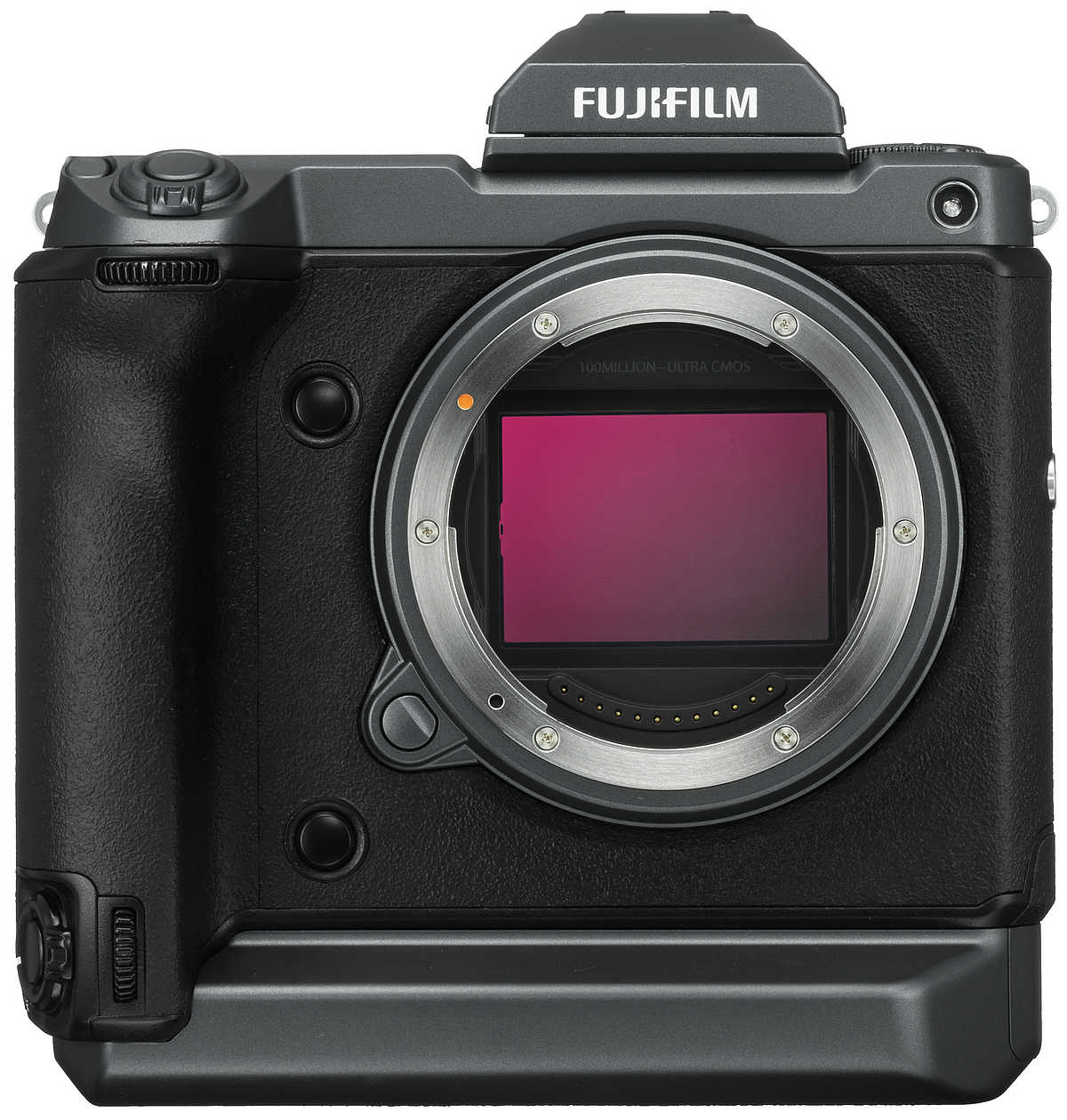 PHOTOKINA 2018, COLOGNE, GERMANY, September 25th, 2018 －FUJIFILM Corporation (President: Kenji Sukeno) is developing a new flagship model equipped with 100MP+ image sensor to join the GFX system of mirrorless cameras. The new model will be the world’s first medium format mirrorless digital camera to feature an image sensor that has phase detection pixels across the entire sensor, outperforming contrast detection autofocus in tracking a moving subject and delivering greater accuracy in continuous autofocus. This model will also become the first medium format digital camera to feature in-body image stabilization mechanism, to significantly broaden the scope of achieving ultra-high resolution handheld images. The camera boasts substantially improved video recording capability compared to that of the GFX 50S and GFX 50R. It will be the first mirrorless digital camera equipped with an image sensor with the size of 43.8mmx32.9mm to support 4K video recording (4K/30P). This model will be Fujifilm’s highest performance camera that offers unrivaled innovation and versatility, as seen in the three “world’s first” features, satisfying all the needs of photographers at a higher level.

(1) FUJIFILM G Format image sensor with over 100MP resolution
The camera is equipped with a 102MP “FUJIFILM G Format (“G Format”) image sensor, specifically developed for this model. It delivers the highest image quality in the history of Fujifilm when combined with the fourth-generation “X-Processor 4” image processing engine that delivers superb color reproduction Fujifilm is famous for, and FUJINON GF lenses that offers ultra-high resolving power. Phase detection AF coverage on the entire sensor (approx. 100% coverage) enables fast and highly accurate autofocus regardless of your subject’s position within the frame, providing a level of performance that defies the current standards of medium format digital cameras.

(2) World’s first medium format digital camera to feature in-body image stabilization
In general, the higher the number of pixels that an image sensor has, the greater the likelihood of producing images out of focus from camera shakes. This is why Fujifilm has developed a new in-body image stabilization system for the G Format. This is also a world’s first for medium-format digital cameras. This has dramatically expanded the scope of achieving ultra-high resolution images (100MP+) hand-held, allowing users to explore new photographic opportunities.

(3) World’s first medium format mirrorless digital camera capable of recording 4K video
The combination of X-Processor 4’s advanced processing capability and the new image sensor with fast read speed has enabled 4K video recording (4K/30P, 10bit), the world’s first for a medium format mirrorless digital camera. The use of the larger image sensor facilitates a shallower depth of field, broader tone reproduction and advanced sensitivity characteristics. This, in turn, makes it possible to record a subject’s texture, three-dimensional feel and even the atmosphere of the scene with an unprecedented level of ease.

(4) Lightweight and robust magnesium alloy body with integrated vertical grip
The new camera has the size and weight equivalent to a high-end DSLR despite featuring an image sensor which is about 1.7 times the size of a 35mm sensor. This will be the first GFX camera to feature an integrated vertical grip, making it more robust and comfortable to hold, especially when large telephoto lenses are used. 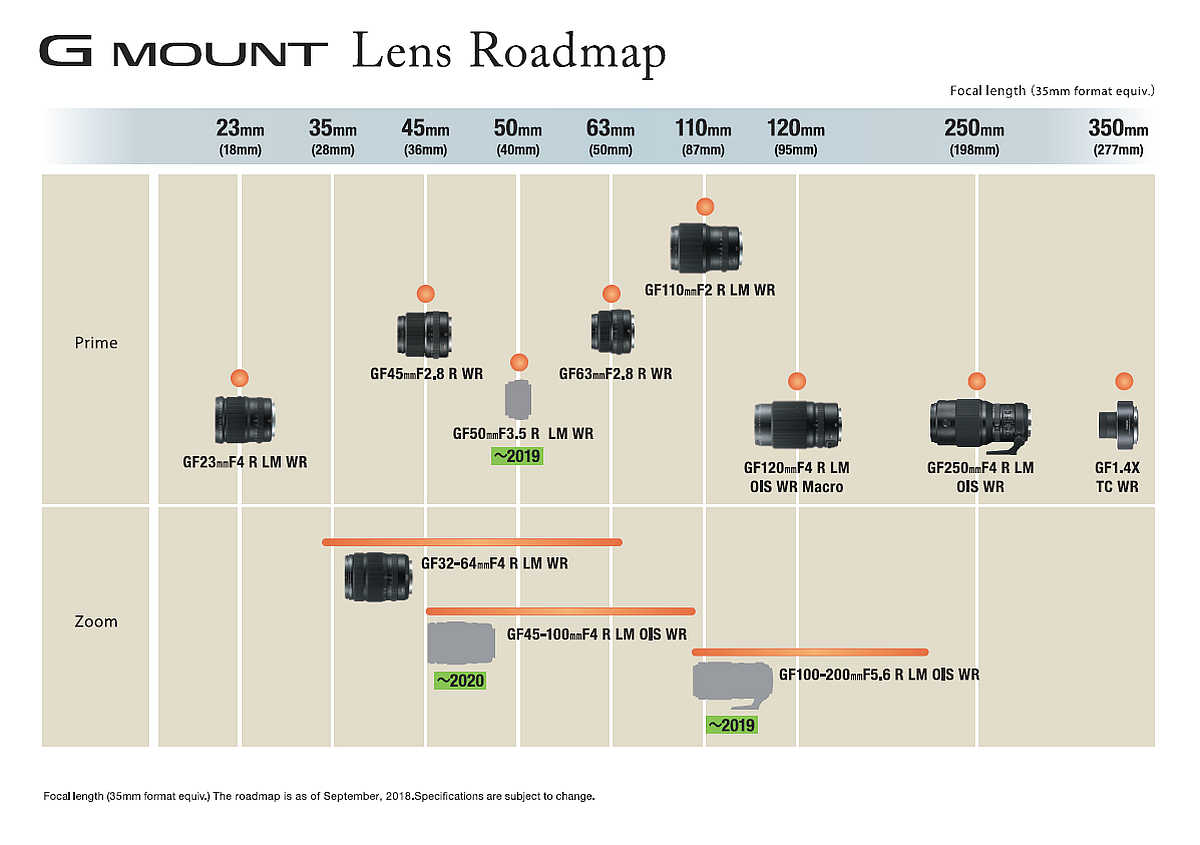 Lenses added to the development roadmap

2. “ GF50mmF3.5 R LM WR” compact prime lens
This is the smallest and the lightest lens in the GF lenses with the focal length of 50mm (equivalent to 40mm in the 35mm film format). Combined with the GFX 50R, announced today as well, it adds to a very portable and compact medium format digital camera system.

3. “GF45-100mmF4 R LM OIS WR” mid telephoto zoom lens
This is a highly versatile zoom lens that covers the focal length range equivalent to 36mm to 79mm in the 35mm film format, perfect for portraiture and snapshots. When combined with the existing GF32-64mmF4 R LM WR, GF100-200mmF5.6 R LM OIS WR and the teleconverter, the 4 lenses make a set that covers the focal lengths from 32mm to 280mm (equivalent to 25-221mm in the 35mm film format). 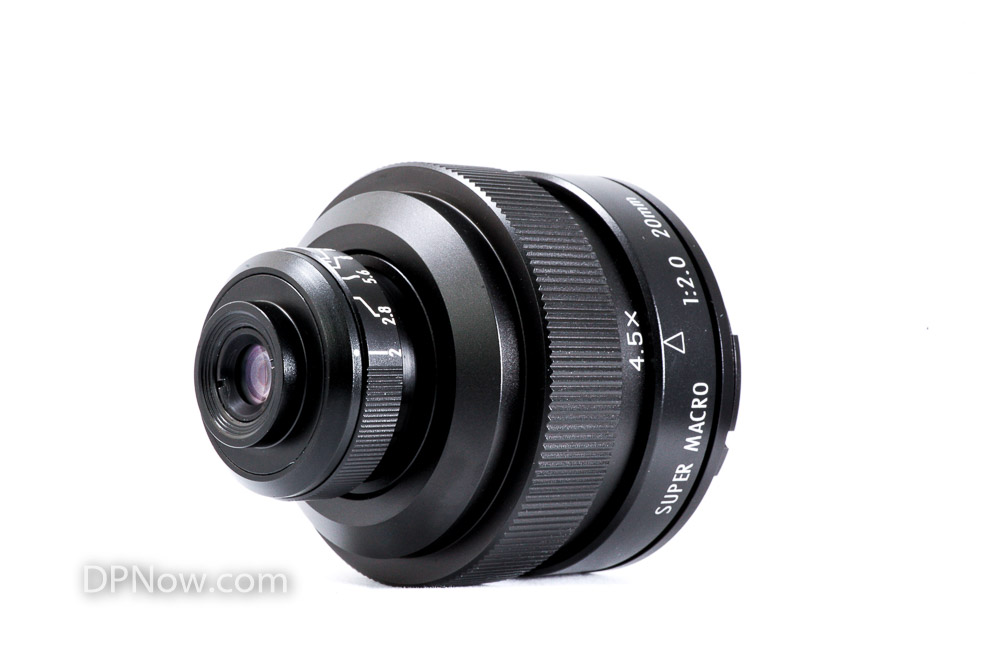 Zhongyi Mitakon 20mm f/2 4.5X Super Macro Lens is very compact in its class which allows photographers to capture extremely fine details or patterns with ease. The lens is capable of creating unbelievable macro images ranging from 4x to 4.5x magnification. Users no longer need to DIY or use any extension tubes to reach high magnification shooting. It incorporates a 6pcs of elements in 4 groups structure which delivers impressive resolution from corners to corners. Weighing merely 0.5 lbs (230g) and 6cm long, it is a perfect companion for wildlife and outdoor shooting. The wide angle of view and close focusing distance allows you to compose creative images with more information included into the frame. Greater magnification (up to 13:1) can also be achieved by stacking extension tubes or bellows. The high magnification is also extremely useful for scientific purposes.